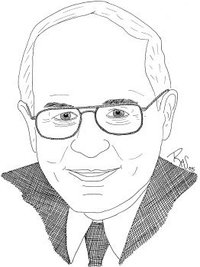 Nobel Peace Prize Nominee Douglas Roche is on his way to Oslo. Don’t miss the opportunity to meet him!

For over a decade the Conference of Disarmament, the main multilateral forum for arms control and disarmament issues, has failed to commence deliberations let alone negotiations on key nuclear disarmament steps or on the complete abolition of nuclear weapons. At a public meeting in Oslo on 14 June, Nobel Peace Prize Nominee Sen…ator Douglas Roche and Right Livelihood Award (‘alternative Nobel Peace Prize’) Laureate Alyn Ware will discuss why it is important and now practical for like-minded countries to start an independent process to commence preparatory work for a convention against nuclear weapons, how this would work and how to engage the nuclear weapons states in the process.

The Hon. Douglas Roche, O.C. (Order of Canada), is an author, parliamentarian and diplomat, who has focused throughout his 40-year public career on issues of peace, disarmament, development and human security issues. In addition to making significant contributions at numerous levels of society, his service has been instrumental in stimulating others to achievement, especially in the area of nuclear disarmament. By amplifying the voices of others he has been uniquely effective. He was instrumental in founding Parliamentarians for Global Actions (PGA), the Middle Powers Initiative (MPI) and Parliamentarians for Nuclear Nonproliferation and Disarmament. His service in this regard has had recent successes. Last year he helped gathered 550 Order of Canada recipients who signed a statement urging Canada to join in negotiations for a Nuclear Weapons Convention. Their statement stimulated the drive for a unanimous consent motion in both Houses of Parliament in December 2010 directing the Government to engage in such negotiations. Mr. Roche has been a Senator, Member of Parliament, Canadian Ambassador for Disarmament, and Visiting Professor at the University of Alberta. He is only the second Canadian in history to hold elective office (the House of Commons), appointed office (the Senate), and ambassadorial rank. He was elected Chairman of the UN Disarmament Committee at the 43rd General Assembly in 1988.

Alyn Ware is Global Coordinator of Parliamentarians for Nuclear Nonproliferation and Disarmament, co-founder of the Abolition 2000 network of over 2000 organisations calling for a nuclear weapons convention, was the UN campaign director for the project that achieved an Advisory Opinion from the International Court of Justice on the illegality of nuclear weapons, and drafting coordinator of the Model Nuclear Weapons Convention which is being circulated by UN Secretary-General Ban Ki-moon as a guide to nuclear disarmament negotiations. As Vice-President of the Nobel Peace Laureate organization International Peace Bureau, Alyn has played an active role in the Nobel Peace Summits and the drafting of their Charter for a World Without Violence and the Hiroshima Declaration for Nuclear Abolition. Alyn was a leader in the campaign to abolish nuclear weapons in New Zealand, helped produce the Peace Studies Guidelines adopted into the New Zealand curriculum (pre-school, elementary and high school), and cofounded a number of peace education programmes including Schools Peace Week and the Cool Schools Peer Mediation which has been introduced into approximately half of New Zealand schools.