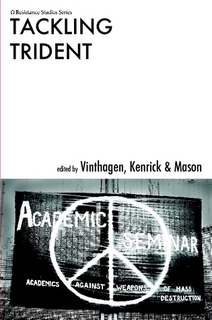 We have the pleasure to inform you that «Tackling Trident – Academics in Action through Academic Conference Blockades» is out. This is the first in our Resistance Studies Series.

Tackling Trident is about two unique academic conferences in which an international group of academics, while discussing scientific conference papers, simultaneously blockaded Faslane Naval Base, home of the UKʼs Trident system of nuclear weapons of mass-destruction, in Scotland, in January and June 2007.

This book presents the academics that took part in the innovative ʻAcademic Conference Blockadesʼ, the conference papers that outlines the scientific rational behind their nuclear resistance, and the year long campaign – Faslane 365 – in which this ʻcritique in actionʼ occurred. Tackling Trident is a book written by engaged academics that tackles nuclear weapon issues, Trident, academic responsibility, and possibilities for academic, personal and social change. This book is a fundamental challenge to the suggested scientific legitimacy of nuclear weapon ʼdefenceʼ, and the suggested political and moral ʼneutralityʼ of academia.

“It is now clearer than ever that we have to think of science, whether natural or social, as part of the struggle to stop the self-annihilation of humanity. More than engaged academics, science as engagement. This book is a great step in that direction.”
John Holloway, professor of sociology,     Benemérita Universidad Autónoma de     Puebla, Mexico

Single copies to institutions and libraries: Order through irene.publishing@gmail.com and we will send a bill with 30 days time for payment.

More than one copy? 25% off if you order more than five copies. Send your order as an e-mail to irene.publishing@gmail.com