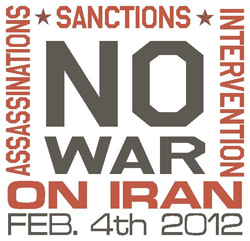 In many ways, the U.S. war on Iran has already begun.

The U.S. government is shaping public opinion to accept military intervention in Iran in the name of «national security.» Fabricated stories that claim evidence of Iran pursuing nuclear weapons is being blasted through mainstream media and repeated by almost every mainstream politician.

The U.S. has authorized harsh economic sanctions that could literally destroy and devastate the lives of millions of Iranian civilians. In addition to the sanctions, there have been targeted assassinations of Iranian nuclear scientists and a U.S. surveillance drone was discovered in violation of Iranian sovereignty and airspace.

Iraq is devastated from decades of U.S. military intervention and sanctions that took the lives of hundreds of thousands of children, rounded up and tortured innocent people. The Iraq war led to 4.5 million people being driven from their homes.

Afghanistan, the poorest country in the world is being destroyed by the richest. U.S. drones dropping bombs on civilians, striking fear and terror in the hearts of innocent people daily. Thousands of people remain in indefinite detention perhaps for the rest of their lives in Guantanamo and Bagram.

Let the whole world see that we will not let the U.S. rain death, destruction and devastation onto yet another country and further inflame a dire situation in the Middle East. One thing we know is that when people stand up together to resist the crimes of their government like the courageous protesters of the Arab Spring and Occupy, something beautiful can emerge.

NO war NO sanctions NO intervention NO assassinations

We may request cookies to be set on your device. We use cookies to let us know when you visit our websites, how you interact with us, to enrich your user experience, and to customize your relationship with our website.

Click on the different category headings to find out more. You can also change some of your preferences. Note that blocking some types of cookies may impact your experience on our websites and the services we are able to offer.

These cookies are strictly necessary to provide you with services available through our website and to use some of its features.

Because these cookies are strictly necessary to deliver the website, refuseing them will have impact how our site functions. You always can block or delete cookies by changing your browser settings and force blocking all cookies on this website. But this will always prompt you to accept/refuse cookies when revisiting our site.

We fully respect if you want to refuse cookies but to avoid asking you again and again kindly allow us to store a cookie for that. You are free to opt out any time or opt in for other cookies to get a better experience. If you refuse cookies we will remove all set cookies in our domain.

We provide you with a list of stored cookies on your computer in our domain so you can check what we stored. Due to security reasons we are not able to show or modify cookies from other domains. You can check these in your browser security settings.

We also use different external services like Google Webfonts, Google Maps, and external Video providers. Since these providers may collect personal data like your IP address we allow you to block them here. Please be aware that this might heavily reduce the functionality and appearance of our site. Changes will take effect once you reload the page.