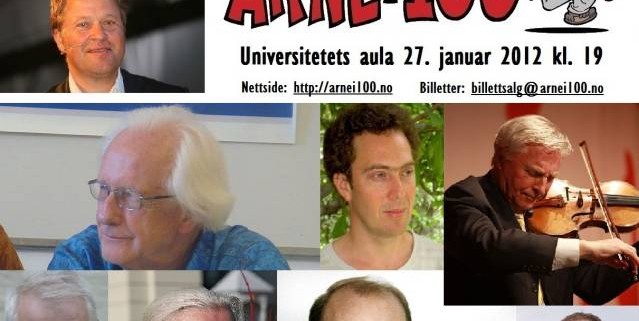 Philosopher Arne Næss (1912-2009) was born January 27th 1912, so January 27th 2012 marks the 100 year anniversary of his birth. On this day the event «Arne i 100» («i 100» being a Norwegian phrase alluding to both age and speed/activity level) will take place in the university aula in Oslo, Norway. We the organizers, who have established the foundation «Arne i 100» led by Arne’s widow Kit-Fai Næss, further aims at organizing a «Arne Næss year» immediately following the anniversary day, to promote and disperse the philosophical ideas of Arne Næss, particularly those addressing the ecological crisis, conflict resolution and philosophy of life.

Do you want to join us? Here are some of your options:

* Buy a ticket for the anniversary event [in Norwegian] Friday January 27th 2012. The program includes musical performances by Arve Tellefsen, David Rothenberg, Leona Næss and the chamber choir Vox Humana, and four talk show-style «couch sessions» involving a number of interesting people linked in one way or another with the issues that were dear to Arne Næss.

* Sign our Greeting protocol [in Norwegian]. By doing this you simultaneously commit to carry out a self-chosen deed or activity in the spirit of Arne Næss at some point in (or throughout) the Arne Næss year. NB: Individuals are not the only bodies that can sign the protocol, so can NGOs, networks, public offices, private companies etc.!

* If you are involved in an NGO, consider linking one of your events to the Arne Næss year (contact post@arnei100.no).

We may request cookies to be set on your device. We use cookies to let us know when you visit our websites, how you interact with us, to enrich your user experience, and to customize your relationship with our website.

Click on the different category headings to find out more. You can also change some of your preferences. Note that blocking some types of cookies may impact your experience on our websites and the services we are able to offer.

These cookies are strictly necessary to provide you with services available through our website and to use some of its features.

Because these cookies are strictly necessary to deliver the website, refuseing them will have impact how our site functions. You always can block or delete cookies by changing your browser settings and force blocking all cookies on this website. But this will always prompt you to accept/refuse cookies when revisiting our site.

We fully respect if you want to refuse cookies but to avoid asking you again and again kindly allow us to store a cookie for that. You are free to opt out any time or opt in for other cookies to get a better experience. If you refuse cookies we will remove all set cookies in our domain.

We provide you with a list of stored cookies on your computer in our domain so you can check what we stored. Due to security reasons we are not able to show or modify cookies from other domains. You can check these in your browser security settings.

We also use different external services like Google Webfonts, Google Maps, and external Video providers. Since these providers may collect personal data like your IP address we allow you to block them here. Please be aware that this might heavily reduce the functionality and appearance of our site. Changes will take effect once you reload the page.